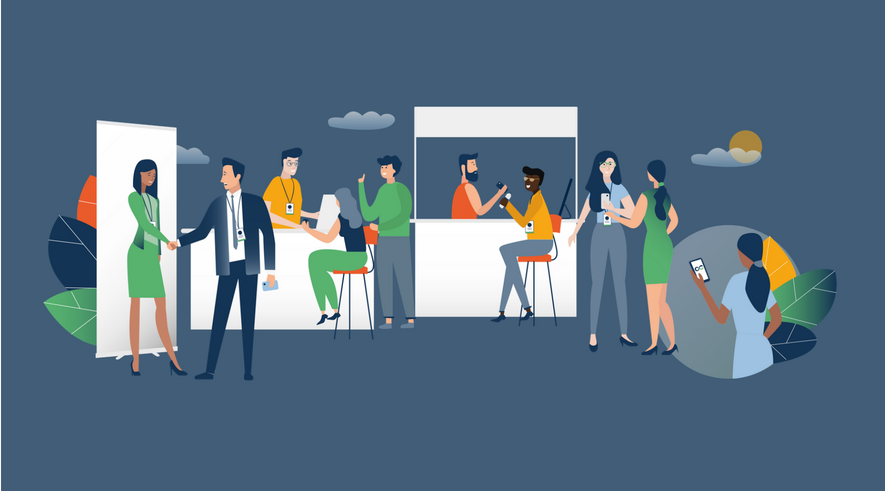 While business networking at events isn't always easy, there are ways to make it more efficient and enjoyable. Check out these 11 tips on how to avoid common mistakes when trying to meet the right people at conferences, expos or conventions.

Real life networking is still the best way to improve your career and projects.

However, as with anything, there’s an art to it. Networking should never be mistaken for socializing with others in your industry. You need to be at once personable and strategic. Making clear goals for yourself and your business is one thing. It’s quite another to figure out how some smart business networking moves can aid these. Some of it can only be learned through practice.

Still, there are a few things you might be doing that could be damaging your networking efforts.

Follow at least some of the following tips and best practices and you'll be sure to elevate your networking game and open up new opportunities.

Plus you'll never again have to stand alone next to the guacamole bowl at the end of the buffet.

Business networking isn’t a mini interview. It’s building a relationship. While it’s great that you want to make an impression on someone, make sure to give the person in front of you enough space to express themselves.

Everyone likes talking about themselves, so make sure to ask questions.

2. You don’t have an elevator pitch

Congrats! You’re finally talking to someone who is in high demand at an event like a thought leader or a star entrepreneur. One thing you can be sure about is they have neither time nor energy to listen to your five minutes explanation of what you do.

“If your pitch can’t fit on a beer mat, a napkin, or the back of an envelope, I’d rather listen to someone else’s pitch that can fit. Most good ideas can be expressed very quickly.” Richard Branson, founder, Virgin, Group

Worse still, saying something vague like ‘Oh maybe I’ll go back to school or something’ is not the right answer to 'what are your plans.'

You’re much better off learning a 15-second version of who you are and what your projects are.

This is a big non-no that should be obvious.

You don’t attend networking events to chat, even if it's an inspiring or fun one. The aim is to build a relationship, which you can’t do without being able to contact the person again.

Scanning someone's QR code, connecting with them via an event app or exchanging a digital business card are good options to ensure follow up.

If you’re (still) using traditional cards, make sure they’re in a case and not bent at the bottom of your handbag.

4. You end up in groups where someone else does all the talking

Here is a tricky one, especially if you’re more introverted. For some, a group conversation where you do nothing but smile and nod at the right time rather than think of things to say is often a welcome relief. Still, be careful of doing it too often.

Passive participation may feel like business networking because you’re socializing with fellow professionals. In reality, you’re not making an impression on anyone.

Make sure to balance your interactions - do at least some of the talking.

5. You’re relying too much on the internet

It can sometimes seem as if technology is on a mission to make sure we never have to talk to anyone ever again. Real life networking is still the only way to make a genuine connection with someone. Sending five million LinkedIn requests isn’t going to get you anywhere.

Make sure that whatever online networking you do leads to face-time in real life.

6. You don’t do your research

While everyone gets stuck for words sometimes, you can make your life easier by preparing in advance.

Read up on what’s been happening in and around your industry and have opinions you can share.

Not only does it mean you have something to discuss, but also makes you appear well informed.

7. You ignore your existing network

Attending events is fun, but don’t forget that you most likely already have a network of people you’ve forgotten about.

Reach out to people you don’t often talk to.

Fellow students from college? Former colleagues? Members of an association you haven't seen in a while? These are all peers who already know you and share common goals, interests, and experience.

Limiting yourself to people you were close friends with is fun. It is also a massive waste of the networks you have at your disposal.

Old contacts tend to like to catch up after a long time and can offer new opportunities. Be sure tot tap into existing opportunities.

8. You do nothing apart from networking

Networking is often a word that strikes fear into the hearts of many. The image that swims into view? A couple hundred mid-level professionals in a dull conference room are hovering around the snack table, quietly panicking about what awkward conversation starter they will have to choose next.

A way around this? Volunteer at the event or offer something valuable for free. Events are always stuck for someone to help with the registration table, help arrange gift bags or even replace a missing speaker.

Think of all the conversations you would have if you were to help at the registration desk for an hour or two. Consider how more natural it'll feel to chat to all the familiar faces of people who are now grateful to you.

9. You show up late and don't give yourself time to warm up

Let's admit the herd of elephants in the room: the crowd factor. A lot of us find it hard, even painful. To keep track of whatever's going on in a space full of loud people.

Show up early before the crowds hit their peak. By the time the room is packed, you will have already found a person - or a group of people - who can then introduce you to others.

Networking isn't about talking or listening or both. While these can constitute memorable experiences, they are still tools. The point of it all is simple but sometimes elusive: connect and meet with the people that are right for you. Don't confuse the means with the end goal.

Try to set quantifiable goals for yourself. It could be to talk to 10 people or have at least three conversations about x topic. However, set a target and pursue it, and soon enough you'll see a positive impact.

This gives you an easy way to plot how your networking is going. It stops you from falling into the trap of spending the whole evening making small talk or only talking to the same people.

Instead of spending time at a conference or exhibition, you'll be investing in it.

If networking is painful for you, you can even try promising yourself a reward at the end. How about an hour watching your favorite Netflix show or munching on comfort food (anything to get the job done, right?)

11. You’re not using tech to your advantage

While business networking is a people focused game, there’s no reason you can’t make it more efficient by using technology. What’s most attendees' biggest frustration about networking? They spend hours talking to people who aren’t relevant to their career or business goals. Then, five minutes after the event is over, they realize that the perfect person was right beside them.

An event platform and networking app (like Swapcard, thank you for asking) replaces this pain with a matching feature. Smart contact recommendations based on matching your and other people's needs, experiences and goals give you a considerable edge. It provides insight into who is around, what they’re interested in and what you can offer each other.

Networking doesn’t need to be a word that leaves you wracked with anxiety or ready to tear your hair out with boredom. A bit of forward-planning and the use of smart tools can make the entire process smoother and - tada! - valuable for your career or business development.

I help organisations transform their core competencies through strategic storytelling . Background as a published author and journalist.